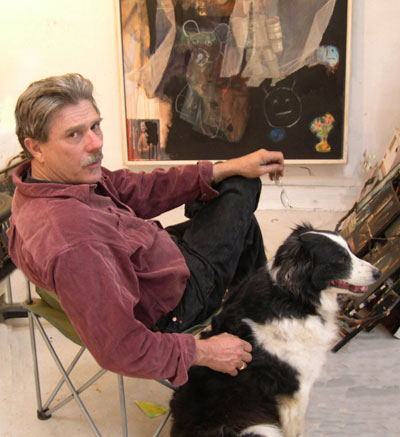 Ron was born in 1950 and raised in Nebraska. The middle child in a family of eight, his earliest influences were of watching his homesteader, grandmother Lucy, making quilts and working with his Grandfather Walt stacking hay. The agrarian culture of hard work ethic, the vast space of the plains and the extreme weather conditions affected his perception of the landscape inspiring him to begin painting as an early age.

Ron was encouraged and guided by his older brother Randy, an artist, and Mrs. Jones his high school art teacher. From 1968 to 1973 he studied art at the University of Nebraska at Lincoln. After graduating from UNL he taught children, K through 12 arts education, teaching painting and mixed media. He attended graduate school at the University of Tennessee at Knoxville then transferred to Ohio State University in Columbus where he received his MFA Degree.

Ron was Artist in Residence for the Ohio Arts Council in Appalachia in Southern Ohio, and worked with Amish children in Plain City Ohio. He went on to teach painting and drawing at Ohio State University and graduate programs at Florida State University in Tallahassee, and Syracuse University in New York.

In 1984 he took a full time position teaching Painting and Drawing at Cabrillo College in Aptos, California. He retired from that position in January 2013. Ron has traveled extensively in Europe and the United States on two sabbatical research leaves, studying the culture and history of art from prehistoric cave paintings in France to contemporary art.

His work has been exhibited nationally, and he is a recipient of NEA Painting Fellowships and a Distinguished Artist Award from Santa Cruz County, CA.

After 30 years in the Bay area, Ron and his wife Melodie are now residing in Abiquiu, New Mexico where he continues to paint, teach workshops and pursue his professional career.